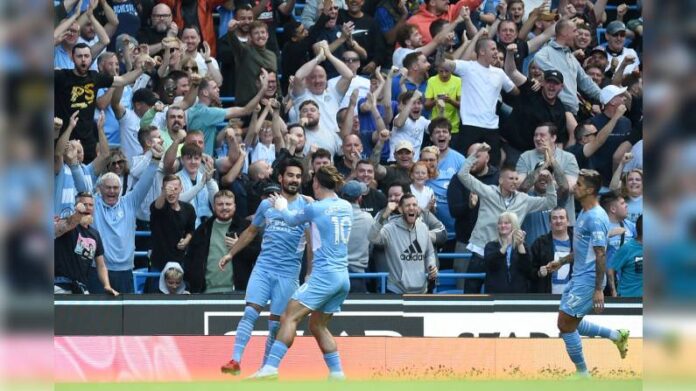 NEWS DIGEST – Ten-man Arsenal were completely outplayed by Manchester City as they slumped to the bottom of the Premier League.

It is the first time since 1954 that the Gunners have lost their three opening games of the league season and this match was effectively over by half-time.

City captain Ilkay Gundogan and striker Ferran Torres scored in the first 12 minutes and any hope Arsenal had of an unlikely comeback was ended when midfielder Granit Xhaka was sent off for lunging into a challenge on Joao Cancelo.

A trademark teasing run from £100m man Jack Grealish set up Gabriel Jesus for an easy third just before the break, then Rodri guided home a fourth from 20 yards just after it.

Such was his side’s total control that City manager Pep Guardiola had used all three substitutes within 16 minutes of the second half starting. It turned into an extended keep-ball session for the hosts, who finished off the rout with Torres’ second six minutes from time.

By the end, Arsenal had managed a single shot – off target – and 19% possession. They are still to score in the Premier League this season and immediately after the international break play Norwich, the team they replaced at the foot of the table.

No Kane, no Ronaldo, no problem

After being forced to abandon their hopes of prising Harry Kane out of Tottenham and opting not to pursue a deal for Manchester United-bound Cristiano Ronaldo, it appears Guardiola will attack the new season without an orthodox number nine.

If his side continue to meet opponents as accommodating as Arsenal, there will be no problem.

The Gunners defence was so flimsy, it scarcely did justice to their status as a Premier League outfit.

City’s opener looked good on the eye. But there was no challenge on Bernardo Silva as he strode through the visitors’ midfield, no effective closing down of Jesus as he lined up his cross and barely a challenge on Gundogan – hardly the greatest physical threat – as he rose at the far post. Add in Bernd Leno’s weak attempt to keep the ball out of his goal and it summed up everything that is wrong about the visitors.

At one point, Ederson stood for fully 10 seconds, not moving, as he decided where to aim his clearance. Eventually Emile Smith-Rowe closed the Brazilian down and forced him to do something.

Perhaps he was a little bored. Earlier, he had delayed for so long an intended pass from his own goal-line that Smith-Rowe almost nicked the ball but could only watch as it ricocheted off him and narrowly wide of the far post. That was as close as Arsenal came to scoring.

In his programme notes Guardiola proclaimed this would be a ‘tough game’ for his team. By the end, it was City’s biggest ever win against the Gunners and their third successive 5-0 home win in the league.

Arsenal’s performance dispelled any notion that a 6-0 Carabao Cup triumph over a team of West Brom youngsters in midweek might shunt Arteta’s under-firing group into life.

The return of skipper Pierre-Emerick Aubameyang and new signing Martin Odegaard made no noticeable difference to two previously tepid performances against Brentford and Chelsea.

The Gunners’ hapless state was exemplified by Xhaka.

An experienced international, needed to guide the youngsters around him, Xhaka’s response to his team going two goals down so early in a key game was to launch himself at Cancelo in a manner that made referee Martin Atkinson’s decision to brandish a red card automatic.

Arteta offered some sympathy to the Swiss as he made his way down the tunnel and spoke to the fourth official in a manner that indicated he felt the decision was wrong.

He may have a different opinion when he reviews the incident – but there is far more for Arteta to find criticism of from this.

Manchester City are next in action at Leicester on Saturday, 11 September (15:00 BST). On the same day, Arsenal entertain Norwich (15:00). BBC

Mike Tyson would have sex moments before fights to avoid “killing” his opponent, ex-bodyguard reveals