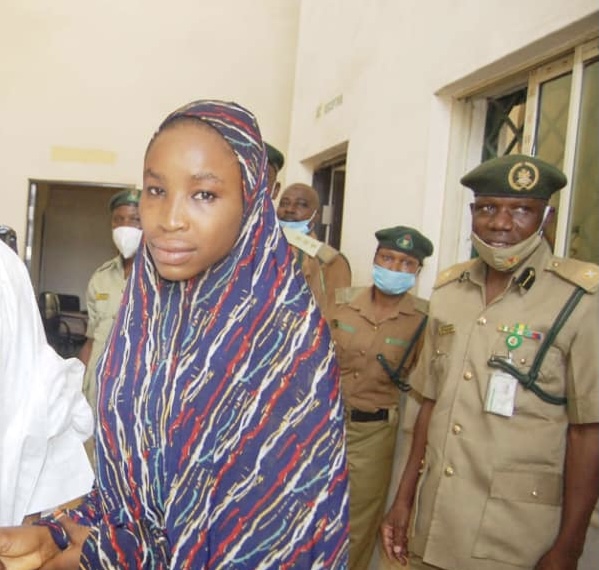 NEWS DIGEST – The Committee on Prison Reforms and Decongestion has freed Rahma Hussein, a child bride found ‘liable’ of killing her husband seven years ago.

Apart from Ms Hussein, the committee, led by Justice Ishaq Bello, also facilitated the release of 30 other inmates from various custodial centres in the state on Friday.

In 2014, Ms Hussein was arrested and charged to a high court in Kano for stabbing her husband to death a day after their wedding.

Delivering the judgement in 2018, Justice R. A. Sadik ordered that the Ms Hussein be “detained at the pleasure of the governor of the state” because she was forcefully married and committed the offence at the age of 16.

On Friday, the committee, in its ongoing tour to decongest prisons, found Ms Hussein worthy of benefiting from the presidential pardon.

In a statement issued to journalists on Saturday, spokesman for the Correctional Centres in Kano, Musbahu Kofar-Nassarawa, said her release was “based on the recommendation from the officials of the correctional centre who attested to her good behavior and industry.

According to him, the committee also advised the governor of Kano state, Abdullahi Ganduje, who holds the power of prerogative of mercy on her judgement, to consider the circumstances that led her to commit the offence and grant her pardon.

He said the governor obliged to the advice and granted her pardon.

Speaking after her pardon, excited Ms Hussein, thanked the committee, Mr Ganduje and officials of the correctional centre for facilitating her freedom.

Ms Hussein said in tears, “I’m grateful to this committee. May Allah bless you. The officials of the correctional centres, who recommended me to be beneficiary of this gesture, may Allah reward you abundantly.

“I’m also grateful to governor Ganduje for his mercy on me. I’m very happy today,” she said.

Mr Kofar-Nassarawa added that the committee had also paid fines of inmates with options of fine, settled compensations, and released those who are in critical health conditions as well as the elderly.

The travails of child bride

Ms Hussein’s travails began in 2014 when she allegedly stabbed her husband, Tijjani Basiru to death, at Darmanawa area in Tarauni Local Government, less than a week after their wedding.

The 19-year-old, who was then charged to court for culpable homicide, initially pleaded not guilty to the offence.

After three years of trial, she then changed her plea to guilty, saying she committed the offence when she was 16 years old.

Delivering judgment, Justice RA Sadiq, cited section 270 of Criminal Procedure Code of Northern Nigeria, saying a court shall not pass death sentence on a pregnant woman or a person below 17 years.

He explained that section 272 (1) of that same procedure states that if an accused is below 17 years, he/she shall be detained at a governor’s pleasure.

The judge explained that section 272 (3), confers the governor the power to determine the custody of an accused that is under 17 years.

“Hence, Rahma Hussein shall be at the pleasure of Governor Abdullahi Ganduje. He is the one to determine where to keep her, wherever he wishes – at school, home, or even government house.

“However, the governor could withdraw that mercy in the event the accused signals bad behaviour or dubious attitudes,” the judge said.