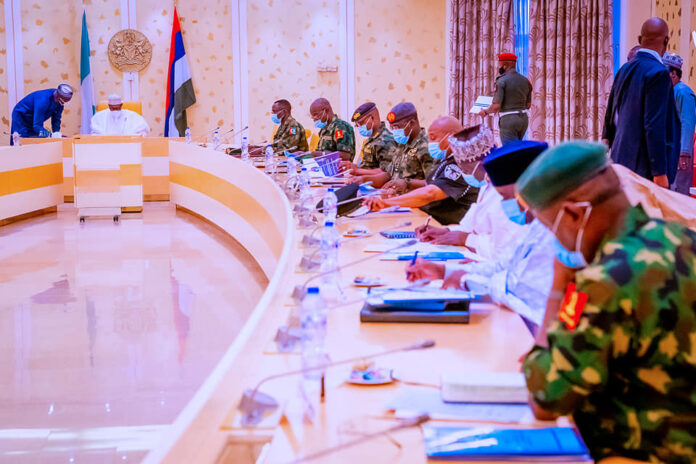 President Muhammadu Buhari, on Tuesday, received briefings from the Chief of Defence Staff, Service Chiefs, the Inspector General of Police, and other heads of security agencies at the Presidential Villa, Abuja.

Also at the meeting are the Minister of Defence, General Bashir Magashi (retd), Attorney General of the Federation (AGF) and Minister of Justice, Abubakar Malami, and the service chiefs led by Chief of Defence Staff (CDS), General Lucky Irabor.

On August 19, 2021, Buhari promised to do everything possible to address the security challenges facing the country and expressed his wish not to leave government in 2023 “as a failure” during the last National Security Council Meeting at the Presidential Villa.

The National Security Adviser (NSA), Major General Babagana Monguno (Rtd), who briefed State House reporters after the meeting, said the President expressed happiness over the successes recorded so far by the security agencies in the fight against insurgents, bandits, kidnappers, and other criminal elements in various parts of the country.

Monguno said the president also expressed his readiness to make more changes in the security architecture of the country if necessary.

The NSA, who said the president told the meeting that he will continue to make changes if he was not satisfied, added that all the issues brought before the president centred mainly on the successes recorded in the operations in the North East.