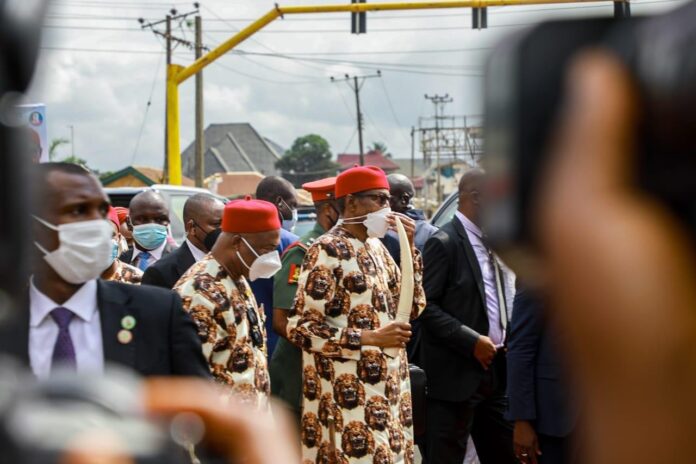 Addressing the people on the occasion in Owerri, Buhari said he was delighted to see the projects executed by Governor Hope Uzodinma within a short time.

He said: “Seeing is believing. I received invitation to come and see what the governor wanted me to see.

“I have seen it now, justified by his integrity in making sure he is working very hard to get things that are necessary for the good life of the people of the state.

“I’m really impressed with what he has done.”

The President, who emphasised the importance of infrastructure and security, said Uzodimma was going through the same problem as himself at the center to make sure that infrastructure was in place.

“I am very pleased with what I have seen and I assure you that at the center, I will help Imo within the Constitution of the Federal Republic of Nigeria.

“I thank you very much for being peaceful and providing the weather for us to go round with the governor to see what he is doing in the state,” the president said.

Earlier in a speech, Mr Uzodimma expressed joy that the president made the visit, “despite challenges”.

He recalled that his administration commenced virtual commissioning of projects in March by Buhari.

He described the projects as strategically and economically important to the people of the state.

“When I took office last year, I undertook a holistic study of the needs of the people.

“I found out that the infrastructure of the state had totally collapsed as almost all road network were broken.

“Owerri was worst hit with flood sacking most part of the city, while property owners had surrendered to the flood, especially within D-Tiger and Chukwuma Nwoha axis,” he said.

The governor said the second phase of the Naze Road, through Obinze Link Road, which was abandoned for over 15 years, would be inaugurated before the end of the year.

He said his administration had done 46 roads, including the Mohammadu Buhari Avenue, housing the Federal Secretariat.

“We are doing more because we believe that with the right infrastructure, our economic development will be hastened and life would be much better for our people.

“That is what informed our decision to permanently solve the perennial flooding in the capital city, Owerri.

“The balloon-driven tunnel at the base of D-Tiger Road was built to check flooding in the area and to recover property swallowed by flood in the last 20 years.

He expressed confidence that Owerri would become flood-free, when the second phase of the projects would be completed.

He said the Egbeada Bypass, also inaugurated by Buhari, would help to ease traffic in the city.

He further said the new Executive Council chambers, which was rebuilt after 40 years, was equipped with modern communication facilities to ease policy and decision making.

He thanked the president for his swift response to end the “politically-contrived security breach” in Imo.

He expressed his administration’s commitment to the peace and unity of the country by building a mini-Nigeria within the state.

The News Agency of Nigeria reports that the Chairman of the South-East Governors’ Forum and Governor of Ebonyi, Dave Umahi, and Chief Andy Uba, the Governorship Candidate of the Progressives Congress in Anambra, attended the event.

Also in attendance were some ministers and presidential aides from the southeast, the Executive Secretary, National Agricultural Land Development Authority, Paul Ikonne, and other top federal and state government functionaries.